A van has become Britain’s best selling vehicle during the coronavirus lockdown according to the latest figures from the Society of Motor Manufacturers and Traders.

While the Mercedes Sprinter delivered for dealers the chaotic charts saw the pure electric Tesla Model 3 top the passenger car list, but even that couldn’t match the Sprinter.

Overall, the previous low for car sales was immediately after WW2 and in February 1946 the market saw 4,044 new cars registered. It is not recorded when a van previously topped the UK sales charts.

The news comes as SMMT releases its latest new car market forecast for 2020, downgrading previous expectations to just 1.68 million registrations. This puts the sector on course to record its worst annual performance since 1992’s 1.59 million units, below the levels seen during the financial crisis and some -27% lower than the 2.31 million new cars registered in 2019.

Despite this, the BEV market is expected to double in 2020 to 77,300 units as new model introductions bolster the market. 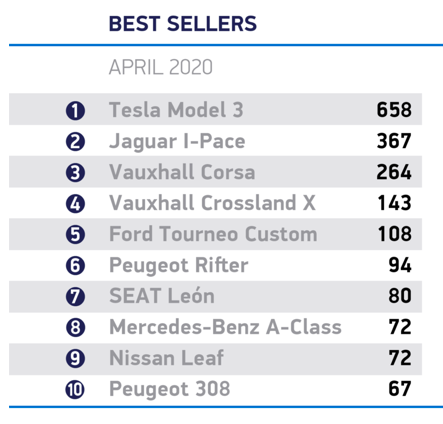 Mike Hawes, SMMT Chief Executive, said, “With the UK’s showrooms closed for the whole of April, the market’s worst performance in living memory is hardly surprising.

These figures, however, still make for exceptionally grim reading, not least for the hundreds of thousands of people whose livelihoods depend on the sector. A strong new car market supports a healthy economy and as Britain starts to plan for recovery, we need car retail to be in the vanguard.

Safely restarting this most critical sector and revitalising what will, inevitably, be subdued demand will be key to unlocking manufacturing and accelerating the UK’s economic regeneration.”

The market has completely skewed with vans outselling cars and the best selling vehicle last month was the Mercedes Sprinter Van, showing our reliance on CVs for deliveries. It also meant that Vauxhall was the best selling brand, taking 11.09% of share, perhaps not unexpected but surprisingly Jaguar came behind them with 9.16% while Ford slipped to 7.08% in third place.

It was the same story for commercial vehicles.

The UK new light commercial vehicle (LCV) market declined -86.2% in April as nearly all registrations stopped due to coronavirus lockdowns. According to the SMMT, just 3,387 LCVs joined UK roads in April, 21,217 fewer than in the same month last year.

Steve Bridge, Managing Director, Mercedes-Benz Vans UK said it was committed to keeping customers moving, especially when they need them the most.

He added, “We are now P1 in the Large Van segment with an incredible 43% market share in April in Large Van. In fact, the Sprinter was the highest selling motor vehicle in April, surpassing all passenger cars in the market, which comes as little surprise when you see how many vans are currently on the roads with the Mercedes-Benz Star on the front, from supermarket deliveries and pharmaceutical vans, to parcel couriers and, of course, ambulances. We are extremely proud to have served the front line during these challenging times.

An incredible 97% of Mercedes-Benz Vans Dealer groups remained safely open for key workers and industries in April, and all but four Dealers registered vans in the month when most of our competitors were shut – a remarkable achievement.

In terms of the hard-working workshops across the Network, labour hours have been record-breaking for every month this year, topping the previous year without fail. Parts sales were only down -53% on last April, which has meant we have been able to ensure our customers remain on the road and doing the important jobs that keep the country moving.” 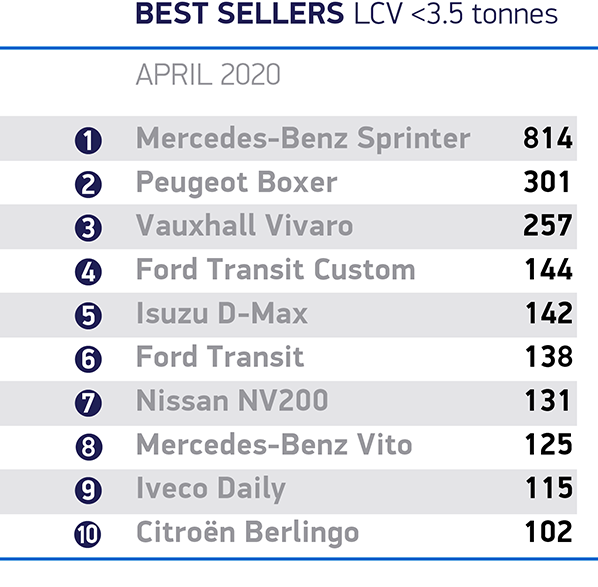 Sue Robinson, Director of the National Franchised Dealers Association said, “Despite these figures, many franchised dealers continued to deliver after-sales service to key workers and the industry is now working hard to enable trading to restart with all necessary measures in place.

NFDA has been talking to the relevant Government departments and manufacturers to ensure work can commence safely for the benefit of dealerships’ staff and customers.

Over the coming months, it will be vital to evaluate a support package that stimulates the market and ensures the long-term stability of a sector which is key to the UK economy and provides employment to thousands of people”.

James Fairclough, CEO of AA Cars went on, “The industry’s eyes are firmly on the Government’s next move, with dealers watching closely for any sign of an easing of the restrictions or further support for businesses forced to close.

The big question is what will demand from consumers be like when dealerships are allowed to reopen? Various commentators have questioned whether some of those who usually commute by public transport may be planning to buy a car for when they return to work so they can continue social distancing.”

Seán Kemple, Director of Sales at Close Brothers Motor Finance, went on, “Though they’re drastic, April’s figures come as little surprise to the motor industry. With the economy ground to a halt in light of Covid-19, new car sales have simply been put on hold. The motor industry will pick up speed, but there is a bumpy road ahead as we drive toward pastures new.

When the lockdown does begin to lift, we should see pent-up demand released, triggering a sharp rise in sales of the cars sitting in showrooms; we’ve already seen this in the European used car market as dealers review and reprice their stock after lockdown. But after an inevitable uplift, the future is less certain.”